Independent, amateur arachnologist Jeremy Poole began studying spiders in 1995, and early in 2016 he started compiling stunning SEM images along the way. Gradually perfecting his technique since then he has been lucky enough to attend courses on electron microscopy run by the Royal Microscopy Society (RMS) at Leeds University and the John Innes Centre, as well as consulting with an expert from Bristol University and various suppliers. His interest in the identification and imaging of spiders was consolidated by  attending a course on identification at Flatford Mill Field Studies Centre, after which he began uploading his findings to the ‘Spider Recording Scheme’ a national database run by the British Arachnological Society (BAS).

There are approximately 700 species of spider in Britain, these can be divided into 34 families and categorised further into separate genera. The main way to identify the species is by the spider’s sexual organs. Other factors that assist with identification are the number and layout of eyes, size of the chelicerae (jaws) and shape of the spinnerets. Jeremy likes to produce images from his Scanning Electron Microscope (SEM) that clearly illustrate these features, and is slowly building up a database of such images that is available on-line for anyone interested to consult (www.spiders.jeremypoolesem.org.uk). 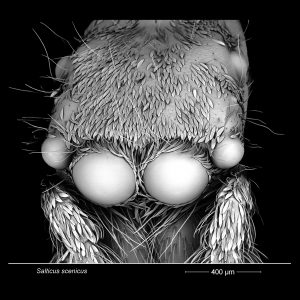 Figure 1: “The head of the jumping spider Salticus scenicus, showing its eight eyes. This image was selected for the July page of the 2018 desktop calendar of the Royal Microscopical Society.”

In the process of imaging Jeremy regularly uses the Deben Generation 5 Back-Scattered Electron Detector (BSED) fitted to his FEI Inspect S50 SEM. This is called in to action regularly to help mitigate the effects of charging and also to soften the shadows that are such a feature of the conventional back-scattered electron detector. The detector is a 4 quadrant diode array positioned around a central hole which allows the electron beam to pass through. This design allows for consistent collection of electrons which are returned from the sample when it is scanned by the electron beam. The Deben detector is commonly used in the study of materials, but as is illustrated by Jeremy’s studies it can be useful in other applications too.

As a physicist and engineer by profession, rather than a biologist, Jeremy was always interested in the physics behind the SEM, and decided to add a BSED to his instrument to find out how this affected his images. The choice of Deben was made by his SEM maintenance engineer, but it was an easy decision. The alternative was to fit a detector supplied by the manufacturer of the SEM, but this would almost certainly have cost significantly more and the detector would probably have been made by Deben in any event. There were various configurations of BSED that could have been chosen. For example, the BSED could have been fitted inside the chamber and clipped on to the final aperture when it was required to use this mode of operation. However, after much deliberation it was decided to fit the Deben Generation 5 system, with an extending arm that moves the BSED into the correct position under software control, removing the need to return the pressure in the chamber to atmospheric to clip the detector in position and then vacuum down once more prior to using that detector. 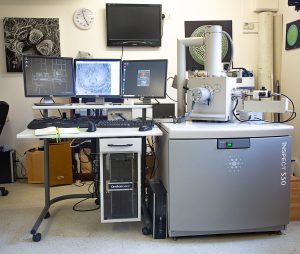 Figure 2: A close up view of the FEI Inspect S50 SEM with Deben Gen5 Back-Scattered Electron Detector fitted in the right hand port of the specimen chamber. The right-hand monitor displays the user interface for the detector. Also visible, beneath and to the right of that monitor, is the display for a Deben Chamberscope.

The individual quadrants of the detector can be turned on or off, or even inverted in polarity, again under the control of the Deben software. This provides different insights into the subjects, or alternatively eye-catching images for their own sake. This is an area Jeremy has yet to explore seriously, although he has already had fun experimenting with various modes.

All of Jeremy’s specimens are captured in the wild, put to sleep using ethyl acetate and then preserved in Industrial Methylated Spirit. The subject is then dissected under a stereo microscope in a petri dish of alcohol and dried using a technique that prevents deformation of the tissues as they dry.  Once the sample has successfully completed the drying process it is mounted onto a flat or angled aluminium stub (using double-sided adhesive carbon pads or carbon-based glue). They are placed into a vacuum chamber overnight to leach out any remaining solvents. The final step in preparing the specimens is to sputter-coat them with a thin layer of gold (~12nm). This step is carried out at low pressure in an argon atmosphere using the Quorum Technologies Q150R sputter coater.

Up to seven specimen stubs are loaded into the SEM for imaging at any one time. The orientation, magnification and focus are adjusted using the SEM computer interface. The brightness and contrast are also carefully adjusted to produce the best possible image. The Deben software helps Jeremy to select a good combination of brightness and contrast for his BSED images that can be fine-tweaked by hand using the same software. The final image is captured at a resolution of 2048×1887 and then goes through post-processing in Photoshop CC®.

Jeremy has been awarded the distinction of ‘Associate’ (ARPS) by The Royal Photographic Society (RPS) for his electron micrographs of spiders and a feature on his submission which was published in the October 2019 issue of the RPS Journal.