In 2017 Stellenbosch University, South Africa undertook an experimental campaign which focused on analysing venomous snake fangs. The motivation behind the campaign was to understand in detail the internal and external morphology and mechanical properties of snake fangs. The study focused on comparing the maximum Von Mises stress values when a load was applied to the tip of the fang (3 fang phenotypes were tested).

Each individual fang was loaded vertically in rigid foam and the foam was attached to a glass rod for microCT scanning and high-resolution X-ray CT scans were recorded. Morphological analysis was performed measuring both the fang length and diameter amongst others. Physical compression tests were carried out for two selected fangs using the Deben CT500 stage. Each fang was epoxy-glued onto a polymer disk, this disk was then attached to the top jaw of the CT500. An additional polymer disk topped with a layer of rigid foam was then attached to the bottom jaw. The two disks were slowly moved together at 0.2mm/min (in compression mode) and the rigid foam was pierced with no measured load (~0.1N) showing that fangs are excellent at piercing! The cross-sectional area of the fang was taken at the point of failure to allow calculation of stress. The total length of the fang was taken for calculation of strain. During the compression process live X-ray images were recorded and load tests were successfully recorded for 2 fangs. 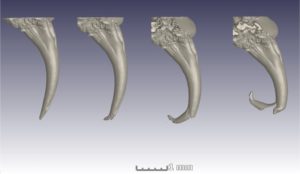 Fig. 1: A sequence of microCT scans which show the progressive failure in a Naja nivea fang. 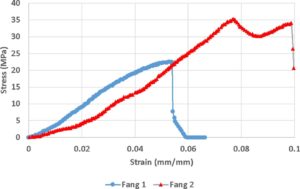 The results obtained indicate that closed fused fangs are generally longer, more slender and more curved than other type of fangs. Open groove fangs are shorter and not as curved but have thicker walls and higher material volume. It was also observed that although most fangs have sharp edges, the specific type of sharp edge varies from fang to fang.

Using morphological analysis and structural mechanics simulation under microCT it was discovered that the 3 fang phenotypes all have distinctive characteristics aside from the venom-conducting canal (including shape, curvature and sharp edges). Results obtained relating to stress values show that all fang types respond in a similar way to being placed under load, both parallel and laterally. Lateral loads cause stresses 3 times greater than parallel loads. The results show that the piercing and cutting ability of the fangs are key to their success as the fangs are not physically very strong – this relates back to the differences discovered in the fangs sharp edges.

According to Professor Anton Du Plessis: “The Deben CT500 stage made it possible to achieve something incredible here: we measured the compressive properties of two snake fangs – which are only 5mm long each! The failure location correlates with simulations of microCT data of the fangs – these are the location of high stress in the fang”

For more information on this fascinating work, including 3D print models and microCT data of snake fangs, see the publications below or visit Professor Du Plessis’ research page: https://blogs.sun.ac.za/duplessis.